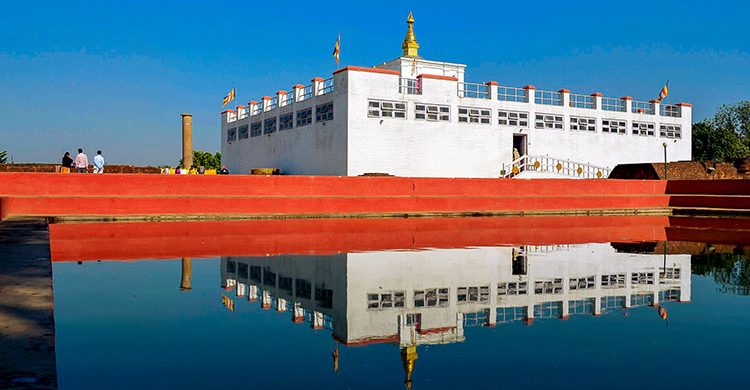 Historic and a famous World Heritage site Lumbini “Birth place of Buddha”is situated in southern -western part of Nepal with area of 4.8 km in length and 1.6 km in width. The holy site of Lumbini is bordered by a large maonstic zone in which only monasteries can be built, no shops, hotels or restaurants. It is separated into an eastern and western monastic zone, the eastern having the Theravadin monasteries, the western having Mahayana and Vajrayana monasteries.

Gautam Buddha born as Prince Siddhartha, was the person who began the religion of Buddhism. His father was a king named Suddodana and his mother was Maya Devi. Siddhartha lived in luxury; his father kept trouble and hard work far from him. A seer predicted that if Siddhartha stayed inside his palace his whole life, then he would become a great king.  However, if left the palace, then he would become a great religious leader. The king did not want his son to become a religious leader. He married at the age of 16 with Yashodhara and they had a son, Rahul. Although Gautama had everything he could want, he still was not happy. He wanted to learn the meaning of his existence. One day he got out of the palace against his father’s orders. He saw the “Four Passing Sights”. An old crippled man, a sick man, a dead man, and a holy man with no home. Right then, Gautama knew that nothing can stop people from being born, becoming old, getting sick, and dying. He decided to give up his worldy life. He would become a holy man with no home. He would look for the answer to the problem of birth, old age, sickness, and death. Siddhartha started to think again about his path. He thought there might be a better way than hurting himself. He found a Bodhi tree and started to meditate. He meditated under the tree for 49 days. His mind is said to have become pure, and then, six years after he began his path, he said “he found Englightenment, and became a Buddha.

Lumbini has a number of temples, including Mayadevi Temple and several others which are still under construction. Many monuments, monastries and a museum, the Lumbini International Research Institute, are also within the holy site. Also there is the Puskarini or Holy Pond,where the Buddha’s mother took the ritual dip prior to his birth and where he had his first bath.At the other sites near Lumbini, earlier Buddhas were, according to tradition, born, then achieved ultimate Enlightement and finally relinquished the early forms. The holy site of Lumbini has ruins of ancient monasteries, a sacred Bodhi tree an ancient bathing pond, the Ashoka pillar and the Mayadevi Temple, where they supposed place of birth of Buddha is located. Form early morning to early evening, pilgrims from various countries perform chanting and meditation at the site.