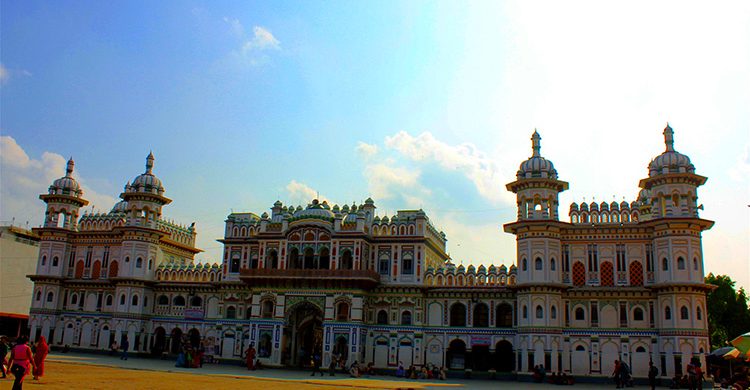 The Janakpur city is also known as Janakpurdham, which was founded in the early 18th century. According to oral tradition, an earlier city existed in the area, which was the capital of the Videha dynasty that ruled Ancient Mithila. This temple is one of the biggest in Nepal, was built by Queen Brisabhanu Kunwari. The temple is architecturally unique. Its inner sanctum contains a flower-bedecked statue of Sita that was apparently miraculously found in the Saryu River near Ayodha. In the early evening, the temple is lit with colorful lights and filled with hundreds of pilgrims expressing devotion to Sita and Ram. Adjacent to the Janaki Mandir is the Ram Sita Bibaha Mandir. A building that marks the place where Ram and Sita were married.

Sita the wife of legendary hero Ram was born in Janakpur. Throughout the year, many pilgrims come to pay their respects to Ram and Sita who are the main religious attractions in Janakpur. The city is thronged by worshippers and visitors alike especially during the festival of Bibah Panchami. This annual festival is celebrated on the occasion of Ram and Sita’s marriage and their wedding ceremony is enacted throughout the week.

This originally belonged to Lord Shiva the Destroyer and in the process; the bow breaks into three pieces. One-piece flies up to heaven. Another falls down to the depths of the underworld. Today, there is a huge pond called Dhanush Sagar above the very spot. The third piece flies to present-day Dhanushadham, about 40 kilometers from Janakpur. Ther, visitors will see huge rocks shaped liked a bow. Thus, after Ram’s successful attempt to string the bow, Janaki’s father, King Janak gives his daughter’s hand in marriage to the brave prince of Ayodhya.

On the full moon day of February/March before the festival of Holi one day, Parikrama of the city is celebrated. Many people offer prostrated obeisance along the entire eight km route. Two other festivals honor Ram and Sita. Ram Navami is the birthday of Lord Ram, in March- April draws thousands of pilgrims. The Vivah Panchami or Vivah festival re-enacts the wedding of Ram and Sita at the Vivah Mandap Temple on the fifth day of the waxing moon in November or early December.