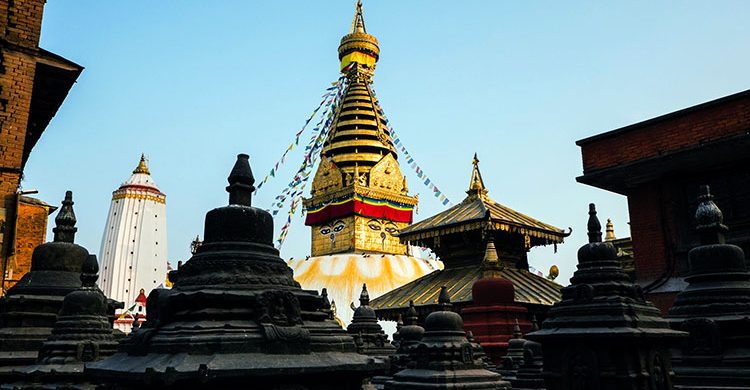 Swyambhunath “Monkey Temple”, located in top hill in the west of Kathmandu valley, majorly a Stupa one of the old religious complex place where we can see the brotherhood of the religion between Buddhist and the Hindus. Swyambhunath, also known as the Monkey Temple as there are holy monkeys living in parts of the temple in the north-west and also the oldest religious sites in Nepal.

Although the site is considered Buddhist, the palace is reversed by both Buddhist and Hindus. Numerous kings, Hindu followers, are known to have paid their homage to the temple, including Pratap Malla, the powerful king of Kathmandu, who is responsible for the construction of eastern stairway in the 17th century. According to the Gopal vamsavali, Swayambhu was fouded by the great grandfather of King Manadeva, King Vrsadeva, about the beginning of the 5th century AD. This seems to be confirmed by a damaged stone inscription found at the site, which indicates that the King Manadeva ordered work done in 640 AD. However Emperor Ashoka is said to have visited the site in the 3rd century BC and built temple on the hill, which was later destroyed. Legend has it that the Buddha himself visited Swayambhu and gave teachings there two hundred years earlier.

The stupa consist of a dome at the base. Above the dome , there is a cubical structure present with eyes of Buddha looking in all four directions with the word unity’’ in the main Nepali dialect between them. There are pentagonal Toran present above each of the four sides with statues engraved in them. Behind and above the torana there are thirteen tiers. Above all the tiers, there is a small space above which the Gajur is present.